Skip to content
Let’s look back on the top 10 shoulder dislocations over the past decade which eventually led to shoulder instability
and this recent Latarjet procedure to fix it!
10. Junior hockey

. Getting run from behind by an overweight defense man.
9. Rough housing with my older brother in Mexico

.
8. Swinging my water bottle at an aggressive Magpie while pre riding the 2013 World 24Hr course in Canberra Australia

, shoulder came back in after 10-15 minutes of trying.
6. Throwing my bike over the shoulder (and the shoulder out) to hike a bike over Thorong La pass at the 2014 Yak Attack in Nepal

. Popped back in after a minute.
5. Post race massage in Pokhara

after 2014 Yak Attack. 90 lb Nepalese pushed the shoulder out and then freaked out and ran away. Shoulder came back in after a few minutes.
4. Slipping on a rock while swimming in a Billabong in North Australia

. 3 hr hike out to the hospital to have it relocated.
3. Crashing off the side of a Himalaya mtn in North India

while trying to avoid an oblivious hiker in 2016. Two travellers helped me hike out 4 hours. A hippy German doctor tried to relocate it with no luck. Eventually my friends and I started talking about the Dalai Lama which relaxed everything, and the shoulder popped back in.
2. Crashing on a water pipe while training on the mountains surrounding Kathmandu

, February 2020. Spent the next 4 hours hiking out then grabbing a rough taxi ride to the hospital to have it relocated. Missed my flight to Spain

for the @andaluciabikerace and instead walked right into a 7 month lockdown in the Himalayas.
1. December 2020, got a pole stuck while ski touring down Canoe mountain in Valemount

with Reiner Thoni . Spent the next 4 hours skiing out and driving to Mcbride to get it relocated. Doctor over drugged me, and I made the decision it was time to get this shoulder fixed.
January 2021. Declan Unsworth made some calls and soon I was under the

at the Banff Sports Med Hospital, getting repaired by Doctor Heard

with Rob Fawcett.
– Leaning on the shoulder the wrong way while getting out of bed to race stage 3 of the Titan Desert in Morocco 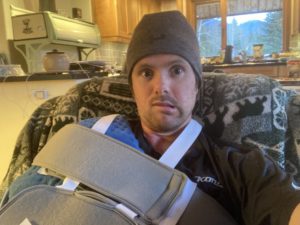 One of the highlights of the year was having a big

Couple hundred more km the past few days from Nort

Error: Access Token is not valid or has expired. Feed will not update.