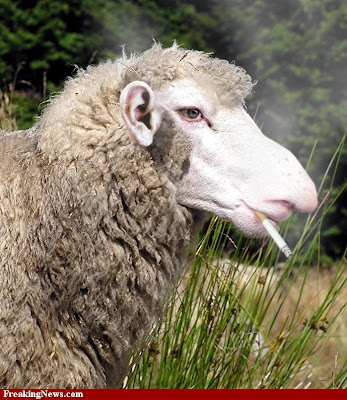 New Zealand is a small country of just over 4 million people and apparently over 10 million sheep. The sheep are all over the place like a bunch of mating jack rabbits but they are slowly being removed and being replaced by the more lucrative cattle industry. It will be sad if they are removed from the landscape as they fit in perfectly with the peace fullness of this country. It seems like this place is stuck back in the 70’s or 80’s as the pace of life is pretty minimal. The North Island up by Auckland is probably a little different with 3/4 of the countries population living around the region.

After spending a great first two weeks being toured around the country by my friends Jeff and Karen I was finally given my graduation card to set out on my own. For me this meant a bike tour from the North east tip of the island, Picton, down to Queenstown (NZL’s version of Banff).

Stage 1 Picton to Nelson: 100km
Day one of the tour was 100 km from Picton to Nelson. After 60 km on pavement I headed up over a 40 km shortcut through the mountains. Time wise this wasn’t a shortcut as it went up a abandoned gravel track over a mtn and then down a sketchy loose decent. The bike and 20 kg of panniers survived and we rolled into Nelson to meet up with Jeff for a couple days of xc riding in one of the single track hot spots on NZL. I was pretty wrecked still from the previous month of travelling and spent a majority of the time laying low while Jeff made the most of the great riding.

Stage 2 Murchison-Punakaiki: 145km
Day two of the tour I hopped a bus 100 km to Murchison to avoid boring highways. I figure life isn’t long enough for these. Once in Murchison the 90 km ride down the Buller Gorge to the ocean was pretty amazing. This was followed by 20 km of boring highway and then 30 km of spectacular coastal scenery to the hamlet of Punakaiki. Punakakia is famous for its pancake rocks and blow holes. I met up with James at the hostel, a traveller from Wales and we drove down to the blow holes to check them out at high tide as the sun set. Nice spot to call it a night.

Stage 3 Punakaiki– Ross: 135 km
Another nice ride by the ocean to the West Coast hub of Greymouth. Loaded up on food and then road 40 km of flat highways to Hokitika. Met up with Brandon, a bike tourer from the USA and rode with him to an abandoned Hostal called the Old Church. Place was grand with a pool table, BBQ and 40 acres of country farm to ourselves. Brandon is probably my long lost cousin as he not only shares Wallace as a last name but he also has stories of touring around Central America on a bike. Good times.

Woke up early to beat the other tourists up to the popular tourist glacier. The 3 km trail leading to the head of a glacier looked more like a small road then a path and nobody was around yet so I opted to ride up to the glacier. No biking signs look weird sometimes. This plan failed when I began hiking my bike up onto the glacier to get a good photo opt when a ranger walked out from behind a moraine. Not sure what he was doing up there but I was caught red handed. He liked my effort though and told me he didn’t feel like dealing with the paperwork, so he gave me 20 minute’s to get out of sight before the tourist droves arrived. Deal. Road down the highway up and down some big hills to Fox Glacier and opted to hike the no biking trail this time to a cool viewpoint of Fox glacier from through the rain forest. The glaciers in Canada are bigger and more impressive but NZL’s glaciers come down to 250 m above sea level and meet a rain forest! Really Cool. After the sightseeing it was 90 hard headwind km below the Alps and through countryside to Lake Paringa for a rest.

This day was a long one. Started with 50 flattish km along the ocean and then the road headed up a valley into the heart of the Southern Alps. Had a nice headwind and the scenery was the best yet with waterfalls and snowy peaks surrounding the valley. After 120 km of riding I started to tire a little and 2 roadies blew by me telling me to “hop on.” I probably said something like “f” that”. But then decided it might be worth the effort to draft them for a while. After 20 fast km we pulled over to meet up with the camper van that was following the Dad, son combo. Apparently I was now part of a family vacation as Mom and the other son were touring in the camper van and supporting there family members. After a coffee and lunch we hopped back on the bikes, panniers now in the camper van, and the three of us cruised the last 3 hrs through lakeside scenery to the tourist village of Wanaka. Wanaka is a small version of Queenstown, kind of like what Jasper is to Banff. I could have stayed hear a while but wanted to get to Queenstown while the body was still fully revved.

Great ride up over NZL’s highest paved highway at 1070 m. This is pretty low considering Calgary is close to 1200 m! Felt high though and the 750 m drop into Queenstown was a great ending to the first leg of the bike tour.

Yesterday was spent being a lost tourist in Queenstown as I tried to let the body come down from the exertion and today I checked out some of the local xc riding which is great. I highly recommend Queenstown for anyone looking to xc ride, party and sight see. It deserves the claim to being NZL’s Adventure Capital!

The time is ticking as a week today I will return to Canada! I am almost looking forward to the rest but first there is part 2 of the bike tour to take care of!

2 thoughts on “Sheep, Glaciers, and Bikes”

One of the highlights of the year was having a big

Couple hundred more km the past few days from Nort

Error: Access Token is not valid or has expired. Feed will not update.